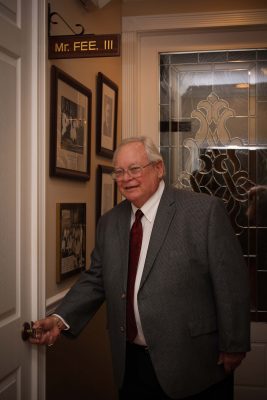 Frank H. Fee, III was born in 1943 and is a fourth generation resident of Fort Pierce. He attended local public schools until 1959, and graduated from the Barlow School, Amenia, New York, with high honors in 1961. He graduated from Davidson College with honors in late 1964. Entering the U.S. Army as a First Lieutenant of Air Defense Artillery, he commanded a guided missile nuclear warheading detachment until 1967. He graduated with honors from the University of Florida College of Law in 1969. In law school, he was a member of Phi Delta Phi, Phi Kappa Phi and admitted to the Order of the Coif. He served as Executive Editor and as Managing Editor of the University of Florida Law Review, 1968-69, and authored “Conclusive Presumptions of Property Value Under Florida’s Statutory Foreclosure Procedure,” 20 University of Florida law Review, 1968; and “Abandoned Property: Title to Treasure Recovered in Florida’s Territorial Waters,” 21 University of Florida Law Review, 1969.

Following graduation and as a third generation lawyer, he associated with his father’s firm, Fee, Parker & Neill. During his formative years, he served as part-time U.S. Magistrate Judge of the Fort Pierce Jury Division of the Southern District of Florida, 1971-72; Associate Municipal Judge, 1970-71, and as St. Lucie County’s last County Prosecuting Attorney in 1972. He served as St. Lucie County School Board Attorney from 1974-79. Subsequently, he chaired the Judicial Nominating Commission, Nineteenth Circuit of Florida, from 1985-1988. More recently he served on the Municipal Charter Review Commission, City of Fort Pierce, in 2018. His memberships include the St. Lucie County Bar Association, the Florida Bar Association, the Real Property and Probate Section of the Florida Bar, and Attorneys’ Title Insurance Fund. Based upon peer review, he was awarded an “AV” rating for legal ability and integrity by Martindale-Hubbell in 1987, and has maintained that rating for over 30 years.

From the beginning of his legal career, he has concentrated in the areas of Real Property, Real Property Litigation, Banking, Probate and Administrative Law. As an adjunct to his Real Property practice, he is a principal of Treasure Coast Title & Escrow, LLC, successor in interest to St. Lucie Abstract & Title Insurance Co., commenced by his family in 1921. He has served, beginning in 1987, as General Counsel, Director and Vice Chairman of Harbor Federal Savings Bank, formerly First Federal Savings and Loan Association of Fort Pierce, and as General Business Counsel, Director and Vice Chairman of Harbor Community Bank from 2011, up to its merger into CenterState Bank, N.A. in 2018.

Much of his practice is devoted to large real property transactions, including institutional loans. He is Treasure Coast Counsel to Farm Credit of Florida and has represented the interests of large agribusiness lenders, including Metropolitan Life Insurance Company, Agricultural Investments; Rabobank, N.A. and AXA Equitable Life Insurance Company, Agricultural Investments. He has been directly involved in and responsible for real estate transactions aggregating well over one billion dollars. Other areas of his practice include Real Property Litigation, Mortgage Foreclosures, Loan Workouts, Loss Mitigation and Probate. He also has represented the Fort Pierce Farms Water Control District since 1972, and the North St. Lucie River Water Control District since 1983. These special taxing districts provide water management to substantial portions of St. Lucie County.

He has been active in community affairs including formerly serving as Vice President of the Fort Pierce-St. Lucie County Chamber of Commerce, and membership in the Fort Pierce Rotary Club. For over 25 years he has served as Chairman of the Basil L. King Scholarship Foundation providing scholarship assistance to residents of St. Lucie County pursuing careers in the health sciences. He is a former board member and presently serves as General Counsel to the Pelican Yacht Club. He is a former Director of the A. E. Backus Museum and Gallery.