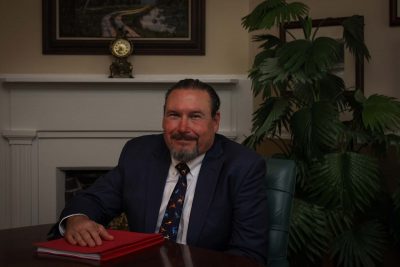 Clay attended local schools, then Woodward Academy, College Park, GA, until entering the early admission program at Indian River State College.  He attained a bachelor’s degree at Stetson University in DeLand in 1979.  After completing Stetson, he worked as an all lines insurance adjuster for G.A.B. Business Services, Inc. in Cocoa, Florida and St. Thomas, U.S.V.I. until 1981, when he entered Stetson’s law school in Gulfport, Florida.

After graduating law school, Clay was admitted to the Florida Bar in 1984, and became an Assistant State Attorney in the Thirteenth Judicial Circuit. From 1984 until 1992, Clay worked as a prosecutor in Tampa eventually serving as a Career Criminal Prosecutor, Deputy Division Chief and Designated Environmental Crimes Prosecutor.  During this period, he prosecuted all manner of crimes including First Degree Murder, Drug Trafficking, Environmental Crimes and Racketeering cases.  In 1990, Clay was appointed a member of the Alafia River Basin Board of the Southwest Florida Water Management by Governor Bob Martinez and served until leaving the Tampa area.

In 1992, Clay returned to the Treasure Coast,  joining with the law firm of Moss, Henderson, VanGaassbeck, Blanton & Koval, P.A, in Vero Beach, concentrating on civil litigation and criminal defense.  In 1995, he again returned to criminal prosecution as an Assistant State Attorney for the Nineteenth Circuit, encompassing Saint Lucie, Martin, Okeechobee and Indian River Counties, specializing in prosecuting white collar criminals in the Major/Economic Crimes Division. Clay was Board Certified in Criminal Trial Law in 1994.

In 1998, he reentered the private practice of law, forming E. Clayton Yates, P.A.  concentrating his practice in criminal defense, civil litigation and business transactions.  Shortly after starting his own firm, he filed the first class action law suits in Florida against payday loan companies, who made short term loans to stressed Floridians at rates exceeding 250% APR.  The payday lenders contended they were not loaning money, but only charging a fee for cashing a check, a “deferred presentment” transaction. Believing these were actually usurious loans under Florida Law, Clay, with capable co-counsel, pursued 18 years of class litigation involving twenty reported appellate opinions, including two opinions from the Florida Supreme Court and one from the United States Supreme Court.  Eventually over twenty million dollars were awarded for class members’ claims.  In 2004, Clay organized the firm of Yates and Mancini, LLC that existed until 2016. Effective January 1, 2018, E. Clayton Yates, P.A. partnered with Fee & Fee, PLLC to form the Fee, Yates & Fee, PLLC law firm.  He currently serves as general counsel to the City of Fort Pierce Housing Authority.

Having taken over 140 cases to a jury verdict, Clay has extensive trial experience. He is a member of the Florida Bar and admitted to the United States District Court, Southern and Middle Districts of Florida and the Supreme Court of the United States. He is also a member of the Saint Lucie County Bar Association, the Florida Association of Criminal Defense Attorneys and the Justice Major B. Harding American Inn of Court. His involvement in community affairs includes formerly serving as a director of the A.E. Backus Gallery and Museum and of the Pelican Yacht Club.