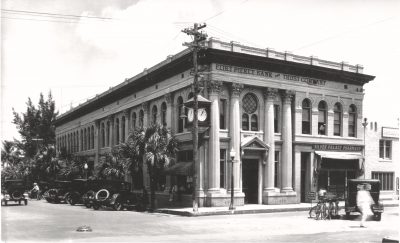 Our firm’s history is a microcosm of the development of the South Florida frontier. Its genesis began with the migration to Melbourne, Brevard County, by Dr. William Miller Fee in the 1870’s, accompanied by his family. Dr. Fee was the first medical doctor on the East Coast of Florida between Volusia County (Daytona) and Palm Beach County. His son, Frank H. Fee (I), following education, established Fee Hardware Co. in Melbourne in 1887, and chartered the Melbourne State Bank in 1893. With the extension by Mr. Flagler of his railroad to Miami and the establishment of Fort Pierce as the railroad’s midpoint maintenance hub, Mr. Fee relocated his hardware business and Melbourne State Bank, renamed Bank of Fort Pierce, to Fort Pierce in 1903 with the assistance of his son, W. I. “Will” Fee. In May, 1905, Mr. Fee’s second son, Fred Fee, graduated from the Law College of John B. Stetson University which was then located in Deland and the only existing Florida law school. He joined his father and brother in Fort Pierce, establishing his law practice and his later law firm in offices of the Bank of Fort Pierce building. Mr. Fee’s oldest son, Will, assisted the operation of Fee Hardware Co. in Fort Pierce, and established a related mortuary business since burial caskets were a hardware line at this early time. The mortuary business was sold at the beginning of World War II to Jos. W. Yates, proprietor of the now existing Yates Funeral Home. A present firm partner is the son of Jos. W. Yates.

The firm’s history is the longest of any continuing law firm in the Treasure Coast and Central Heartland Regions of Florida. It began in 1905, the year St. Lucie County was created from Brevard County. The firm early prospered from a mainstay banking, real estate, and litigation practice which included representation of the property and development interests of Edwin Binney, entrepreneur creator of children’s Crayola crayons. Binney constructed the Fort Pierce Inlet to the Atlantic Ocean, the Fort Pierce Beach Causeway to the mainland, and the Port of Fort Pierce. Interestingly, senior partner, Frank H. Fee III, was engaged in 2018 by St. Lucie County as real estate title consultant for its purchase of the Port for the Port Redevelopment Project.

The boom and bust of the 1920’s in Florida significantly affected the firm, which at the time was named Fee & Liddon. The real estate practice was over-heated, and Fred Fee and Walker Liddon formed the Fee & Liddon Co. to engage in the development of Pinewood Subdivision in the heart of Fort Pierce. Fred Fee chartered and operated St. Lucie Abstract and Title Insurance Co. as an adjunct to the Fee & Liddon real estate practice.

The bust of the Florida boom brought economic turmoil as a forerunner of the Great Depression. The Bank of Fort Pierce failed and was liquidated. With New Deal economic recovery, Fred Fee joined with other organizing directors to charter a mutual thrift institution, First Federal Savings & Loan Association of Fort Pierce. Fred Fee (1888 – 1939) served as Director and General Counsel to the thrift institution, and in 1935, Fee & Liddon was joined in the practice by Fred’s son Frank H. Fee (II) (1913 – 1983). Upon Fred Fee’s death in 1939, his son followed as a director of First Federal and the firm continued as its general counsel. This process was repeated in 1987, when present firm member, Frank H. Fee III, followed his father and grandfather as a director of the institution. Over time, First Federal morphed into Harbor Federal Savings Bank, and in 1998, the institution completed its conversion to full public ownership listed on the NASDAQ exchange. In 2002, Frank H. Fee IV, great grandson of the firm’s founder, Fred Fee, joined the firm and in 2006, while Mr. Fee III served the Bank as Vice Chairman, the Bank was sold and, by mergers, its business and assets passed to PNC Bank.

In 2011, Mr. Fee III joined a group of organizing directors as Vice Chairman to form Harbor Community Bank. He continued to serve as Vice Chairman and General business Counsel for the Bank until its 2018 merger into and with CenterState Bank, N.A.